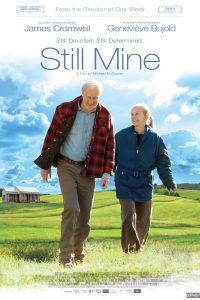 An elderly couple fight against local authorities in rural New Brunswick to build their final home.

Ben Tyler has been diagnosed with cancer. With a grim chance of survival in the best case scenario even if he immediately begins treatment, he instead decides to take a motorcycle trip from Toronto through the Canadian prairies to British Columbia.